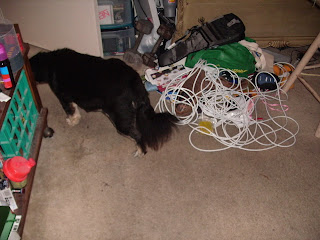 
Today was pretty good. I got to eat some of a samwich my friend D.R. was havin. It was chicken wit some gravy! :) Yum yum, it was good. I also had some noodles.


Mom vakoomed two times today! That's a lot. I don't like the noise. I do like to take naps on the floor, tho. It's nice when the carpit is fluffy and cleen.


I was a little tired this mornin, so I din't even go try and take some of D.R.'s cereal. Usually I do, but I was havin such a good time sleepin, I missed it. She went out later, and came back wit some ice kreem, but she said I can't have it because it's chockolit. Oh well. She did give me a hug after that. :)