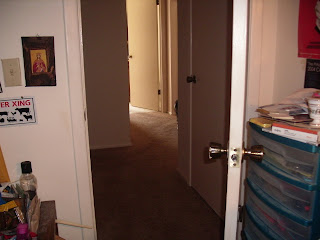 Hi, everyone. My name is Keisha. Thank u for readin mah blog. :)


Today is Fries-day. I think it was named after French fries! I ate some yesterday. They were really good.


Also yesterday, my hooman friend D.R. got new glasses. They are blue! They look nice. I kinda wish I could wear glasses.


D.R. also went to a test for a job innervoo thing. It was different because instead of talking to a person, she took a test on a compooter. D.R. said she felt so much better when she passed! She took the test once before, and it was really hard. This time she did a little better. She doesn't know if she'll get the job, but at least the test part is over.


I did a lot of restin on the floor today. Sometimes I had my paws out in front of me, other times I was just flat on my side. The floor can be a good place to just think about things. Other times, I go to the couch or the bed. They're more soft.


You know what Mom had with dinner yesterday? Vegetables! Oh boy, was I happy. I like to watch her fix food. It is like a moovey.

Hi there! I am Keisha. Thank u for readin this blog. :)


I had a good time with my Dad today. Mom is visiting her brother, so I have Dad and D.R. at home to be with. Dad was playin lots of compooter games. I watched him a little bit. I took time to stay in the compooter room, because it is small and there is a nice lamp. I lay down on the carpet and looked at all the pretty model boats. Dad likes to build model kits. They look real!


D.R. is happy because she got a noo driver's license today. Now she can go vroom-vroom in the car whenever she wants! I hope she drives me to the park soon.


I can't wait for my Mom to come home. She is going to be home by noon on Thursdee. Oh boy, I am going to be happy then! Mom will give me lunch, and I will watch teevee with her on the couch after that.


Here is a video for you to see. I hope you like it!

Hi, everybody. Today I will show u one of the videos my friend filmed when she was at the zoo. They don't have dogs at the zoo, unless you count wolves and hyenas. They just don't have regular dogs. They have lots of big cats, like tigers and cheetahs. :) The cheetahs can run really fast! I bet they'd be good at fetch.

There were so many ducks outside my house this morning, I could hear them all quacking. Some of them have babies. The babies like to swim in the pond near the church. D.R. said she will try to get videos of them too.


I was happy when Mom came home tonight. She had a dinner for her friend's birthday. Also, she went to exercise class. My Dad played lots of compooter games. I like the games because you get to see airplanes fly all over the place. If they had a game called "Find the Snack," I think I would be good at it.