I has a update 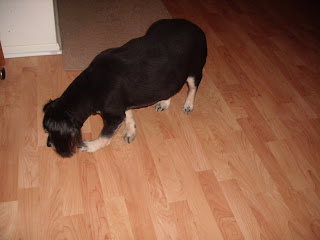 O hai! My name is Keisha. Welcome to mah blog. Thank u for readin it today. :)


D.R. waked up really early this mornin to go to a speshul innervoo. It was all the way in Tampa! D.R. petted me and said bye-bye. Then she had to drive, and it was really a long way, like forever. D.R. even got lost tryin to find the building. When she got there, they said they did not need her after all. D.R. had a big Sad. She drove home. D.R. petted me when she came back. Then, she stayed in her room for a little while. After that, she and her Mom went out to lunch. They had very tasty pizza, and took some of it home. I bet I get to have some later! :) D.R. went back to her room to watch teevee. I stopped in to say hi. She petted me, and I was glad to help her feel a little better.


After that, I rested for a little while on the floor, in front of the teevee, while Dad watched the nooz. People are voting and stuff. Voting is very important. It allows people to choose who is going to be in the gubbermints. It also allows people to say stoopy things on teevee. That makes Dad laugh. I do too. Tee hee. :) D.R. had a speshul ballot where she mailed it in, so she doesn't have to go to the building where everybody votes on Toosdey. She can just stay here and watch hockey games with me. :)


D.R. says the World Series started yesterday! :) Good luck to the Texas Rangers and the San Francisco Giants. D.R. says the Rangers play in Dallas, where the buildings are really tall and the people have nice hats. The Giants are from San Francisco, which has pointy mountains in it, and is nice too. I wonder if I will get a hat?


When D.R. and her Mom were on the way home from lunch, they saw a lot of duckies! The ducks were gathered around a pond in New Port Richey. D.R. says they were very colorful. She didn't have her camera, so she didn't get any pikshers, but they were cute. I like birdees. :)

We are furry sorry fur D.R.

Hugz&Khysses,
Khyra and The Golden Khousins

Thank u, Khyra and Mom. :) I went into D.R.'s room before, and she pet and cuddled me. That helped give happy feelins to us both. :)

That was very nice of you to be there for your Human; nothing like us helping them when they are down.

It is hard looking for a job. We hopes that things go better for D.R. in the future.

It makes me feel mad that they made D.R. drive all the way there for nothing! They should have called her so she didn't have to make the trip. Peetsa always makes things seem better though.

Thank u, Cheyenne-Millie. :) The duckies are very pretty! Sometimes they have many different colors, like green and red and black and white on the same duck. It is like a little painting. :)

Thank u, Daisy. :) D.R. felt better after she had the peetsa. I got to sit with Dad when he had some leftover peetsa, later on. The cheez was yummy and delicious! :)