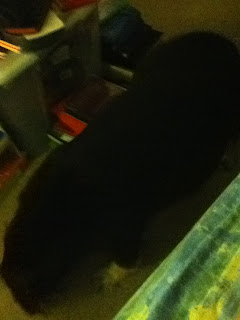 O hai, everybody! My name is Keisha, and thank u for reading this blog. :)

Today is Toes Day. I woke up, stretched, walked a couple feet in front of my blankie in Dad's room, and went right back to sleep. Sometimes it is too early and u need some more Z's. :) Then I got up, later, and went to see if Dad had some breakfast. He takes me for a walk after that. :)

The U.S.A. did well in some diving stuff in the Olympics. I watched it on teevee. I also watched the volleyball and the handball. They were neat! I really would love to run around with the ball in handball. :)

I also watched House Hunters International, when Mom was sitting on the couch. She put on the show, and a nice family wanted to find a house on the beach. They looked at some really pretty places. I would love to run up to the water. :)

Then I went to look in D.R.'s room. She was playing on the compooter. She said I could come in, but I just looked in the doorway, and went back to the teevee. :) I have to get my proper number of lying-down hours. I like to rest most of the day.

D.R. had kind of a Bad day at work. Her boss told her she and some of the other people did a bunch of stuff Wrong. We all make boo-boos sometimes, so D.R. said to herself, she will just try harder as long as they let her work there. D.R. was skeered a little, though, because the work lady said, "I don't want to say that we're letting people go, but we may start letting people go..." When D.R. came home, I ran right up so she could pet me. That made her feel better.

Okay, I am going to sit down and watch the end of the show with Mom. Then it's back to watching Olympics stuff. D.R. said the gymnastics teams were really good, and the swimming guy Michael Phelps won his elebenty billionth medal. Wow! That's more than the most by one person ever. The Olympics is really fun.

The diving was fun to watch!

Tell D.R. that everybuddy makes mistakes, that is how you learn stuff!

Thank u, Daisy. :) I like to watch hoomins jump in the water.

We have been watching the Olympics, too, Keisha. We like the diving, too.

Hi Keisha, we've been watching the Olympics too. They're kind of interesting. Besides, it'll all be gone in a couple of weeks. Well I suspect that if D.R. and some other people did a bunch of stuff wrong then it's not the employees' fault but the poor or inadequate training that's responsible. What do you think?

Thank u, Sam. :) I think the people at work should eat cookies every day that will make them feel better.

I like the kayaking. Tell DR no worries, mistakes is how we grow.
Blessings,
Goose

Hope DR hasn't taken it too bad. USA are doing so well in the Games. Have a good day at the Olympics.
Best wishes Molly

Thank u, Prancer Pie. :) I liked the gymnastics yesterday. :)

Oh no, Keisha..there's not a lot worse than hearing you made a mitake and they not offering to re-train. Instead making threats? ..go lay a bitey on their toes!

Thank u, Doggie and Kubrick. :) It's lots of fun to watch them on TV!