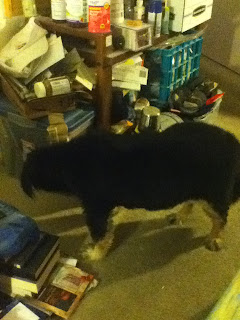 Today was kinda odd. My hoomin friend D.R. got sick to her tummy at work. She had breakfast, and a little after that, she threw up. Oh no! Then she washed and went back to her stuff. She finished the whole day. D.R. didn't get sick again. She will have to take her medicine again, later. I am going to watch her so she's okay. :) I am a sekoority dog, so that's part of my job.

D.R. got to use the wi-fi Internets on her iPod Touch at work! She pressed a special search button and found out that the signal was working. So, she got to use it as a 'guest.' It worked! She was able to listen to some neat stuff on the radio. She said she hopes it works again tomorrow, so she's not bored. Also, she did get to look at the cat pictures after that. So, that's better. :)

I was sleepy again this morning. I like to nap by the door sometimes. Tonight, D.R. took me for a walk. That was good. :)

There was a U Toob vidyo I saw, of a dog show! It was good! The doggies ran across the carpet and did stuff when the judges asked them. They have dog shows on teevee sometimes. They are so much fun to watch. :) D.R. and her Mom love them too. :) D.R. says that when she gets a new apartment, she is going to get the Pet Channel on cable teevee. I bet they have dog shows all the time! :)

Dad was having pretzels before. He ran out, though. He did pet me. That was good. :) We had a little thunder noise today, but no rain. I am glad it was gone pretty quickly. I don't like thunderstorms.

The power went off for a second at D.R.'s office today. Then it came back again. Wow! She said it was a little skeery. Then it was over. Whew.

I got some new toys! Yay. Thank u, hoomins. :) I got three fluffy toys. One is shaped like a star, one is a cat and one is a rectangle that says Catnip on it. I am not a cat, but I like to wrestle my toys. That is fun. I push stuff all over the rug, with my paws and my nose. :)

There is a neat show online, called Rainbow Dog Dachshund Rescue of Texas. It has a show every week. You can watch and meet a real dog, and her hoomin friend. They talk about pet rescue, health, fun games, and other stuff. I likes it! U can watch it for free. U have to get a screen name at Stickam, but that's it.

I hope DR feels all better quickly. You may have to rub her feets again, Keisha. xoxox

I'm glad DR felt better tonight and that she took you for a walk. Sometimes fresh air is the best medicine. xoxo

Hope DR is feeling A OK in time for the weekend Keisha! Have a fabulous Friday.
Best wishes Molly

Poor DR, work is no fun when you're sick (at least that's what our humans tell us)

Thank u, d'Artagnan and Diego. :) My friend said she feels a little better today. That is good! :)

You have a lot going on! I am glad you are such a busy pup. Keeps life interesting! Sorry about D.R. I hope she does not get sick again. You are a good security pup keeping your eyes on her.

Your new toys sound pawsome! Hope you have fun with them!

Thank u, Prancer Pie. :) Walkies are good for u.