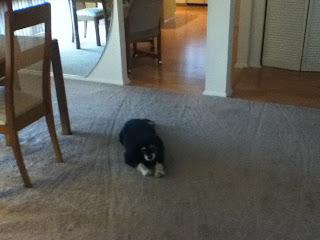 Hi there! I am Keisha. Thanks for reading mah blog. :)


D.R. had a big Sad the other day. Some very bad person took her bank card number and tried to buy stuff with it. The bank called D.R. and stopped the process. Then they told D.R. she'd be getting a new card to replace the other one. Whew! D.R. is so happy they did a good job, she was tellin her Mom and stuff. The card will get here in a day or two, and the bank is also sendin a special paper, so D.R. can write a claim report for their records. She will be even moar happy when it is all finished.


D.R. would like to let all the hooman readers know, if they have bank or credit cards, plz to get the anti-theft thing for them. It is worth it. :)


In other nooz, D.R. was havin some ice cream before. It had chocolate in it, so she couldn't give me any, but when she was done eatin, she pet me and scritched under my chin. That was good! :)


I sat next to Mom when she was doin the crossword. She does the crossword almost every day. I usually don't try to check the words, but I am just happy stayin next to Mom. I think that helps. :)


My Dad is watchin somethin called the Emmy awards, which are for special stuff on the teevee. I am resting instead, because I don't think they give an award to Animal Planet. They have a hooman tellin jokes on stage. I would watch if there were a giraffe or maybe a sea lion.


My Mom says I don't have to get a hair-koot for a while! Yay! :) I get scaird when I go to the groomer's, so Mom said she is not going to take me for now. I also can't have two broken teefs pulled, because I am Too O-l-d to have annasteeza. Yipes. Whatever it is, if it is scary, I am glad I don't have to be there.


I barked a lot this afternoon. There was a guy walking in front of a house across the street. I didn't know who he was, so I barked. He finally left. I don't know if he heard me or not, but I have to try. I'm a sekoority guard. That's what I do. :)

I'm happy to hear that the Bank is bein' nice to D.R. and will not make her pay for the bad people. I wonder if they bought dog treats with that card???

I do excellent security by the fence too - only sometimes if I do a lot my pawrents will come out and tell me to "keep it down"!! I ignore that and keep on barkin' till I'm happy. BOL!

Oh thank heavens the bank caught it in time!!!

Here's hoping that your friend Jimmy gets better real soon! Have a good Monday there!

Thank u, Rubie. :) Sometimes u just have to bark! Protectin ur people is a hard job. :)

Hi Keisha, I'm glad that D.R. will not have to worry about her bank card. Those bad people probably don't like dogs either. Grrrrr. You're lucky that you don't have to go to the groomers. I'll have to go soon. My dad says that my furs grow pretty fast. But it's not scary for us to go to the groomers because my mom or dad stay with each of us for the time that we're there. We get bathed at home so it's just fur-cutting and nails. There are some places here where the groomers will come to your house. Maybe that would be better when you have to go next time.

That happened to our credit card one time. People who take stuff (even numbers) that don't belong to them are Bad!

You is a good skoority guard. You barked da alert and da guy is gone now! Yeah!!!

Thank u, Daisy. :) The kitteh Jimmy Jet has a lot of friends. He has lots of love headin for him. :)