Fursday is here! :) Fries Day is my birthday :) 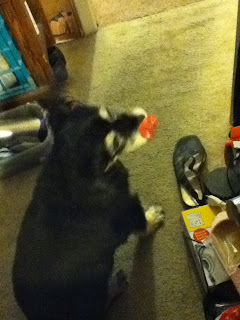 I was doing funny the other day. I wobbled, because my back legs go wiggly sometimes. Also, when I was dozing, I made some whimpering noises as if I were having a bad dream. D.R. and Mom were really worried, but when they checked on me, I was normal again. Whew. :)

Guess what tomorrow is? It is mah birfdee! I am going to be 15! :) I was adopted in 2004 by this family. Before that, I lived with another nice lady, until she couldn't take care of me because she was sick. She put me in the shelter and I was adopted the very next day!! All right!! :)

D.R. had some toof work done. She had a filling and a fake tooth put in, called a crown. She said it hurt a lot, and it still hurts today. Also, she went on an innervoo this morning. She was kind scaired, but it didn't take long. I hope she gets a job soon. Then she can watch movies with me, and we can eat popcorn, and she can scratch my tummy. :)

A guy is mowing our lawn now. He is okay. I don't know his name, but I saw him before, so he is all right. I don't like noises, but the lawn is good to sniff when the mower machine is done.

Happy Birthday. Hope ya get a lot of tummy rubs.
Blessings,
Goose

Hi Keisha, wowie you're going to have a birthday. I bet that your family will give you lots of presents, treats and a few hugs. Happy birthday from Canada.

Dear Keisha OMG 15 , Happy birthday to you and you are a rescue also , so happy birthday again. Happy happy day tomorrow my friend and we send twinkles and fairy dust and star smiles for your big day.
Best wishes Molly

Happy Birthday, buddy! Hope you're having a GREAT day!!!

Thank u, Chicco. :) I am glad to have reached this birfdee.

Happy Birthday, Keisha - we hope you are having a marvelous birthday. Enjoy.