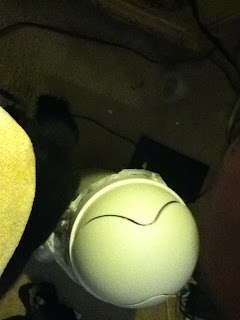 O hai! My name is Keisha. I say hello to u. Thank u for reading this blog. :) It is kinda hard to see in this picture, but that is me, walking in my friend D.R's room. I am next to the garbage thing.

I has a nooz. I was at home Monday nite, and I got sick. :( I threw up. My Mom and Dad cleaned it up. I don't know why it happened. I just felt kind of weird. Mom and Dad were at a birthday party, and then they came home. They had cake, but I didn't have any. I wanted to, but I didn't get to, because I got sick. Oopsie. :( But Mom and Dad and D.R. pet me, so I felt better. Too bad no cake, but maybe next time. :)

D.R. was watching the hockey game yesterday, and the Los Angeles Kings team won the Stanley Cup championship for the first time. Hooray! :) It was fun to watch. :)

Today, I took a nap on the floor in Dad's room. I was so tired, I lay down in front of the blankie instead of on it. The carpet is more scratchy, but sometimes u can't stop a nap attack. :) I like to get as much rest as possible, so I can go on my sekoority rounds later.

I has a sad nooz. A pit bull dog named Lennox, who lives in Belfast, Northern Ireland, is going to be sent to the Rainbow Bridge because some neighbors complained about him. He never bit anyone, never attacked anyone, but some silly hoomins claimed he was 'dangerous.' This is even though Lennox lived with a nice family who had a disabled child, and Lennox never hurt or bit anyone. The case went to court, and the judge said the dog would have to be sent to the Heaven Place. I sad! :( I very sad. It not good. :( Please purr or keep a good thought for the poor doggie and his family.

Hi Keisha , hope you are feeling a bit better now , do update us! Re Lennox that's the problem with this ill thought out dangerous dog act. Poor doglet and poor family that loved it , very sad.
Best wishes Molly

Thank u, Molly. :) I hope people will stop seeing some breeds as all bad.

Keisha, I hope so much that you are going to stay feeling better. I worry when you get sick like that, sweet girl.

Keisha!
I hope you are feeling better now.
I am very sad to know about that doggie. Our thoughts are with his family.
Take care
Kisses and hugs
Lorenza

Thank u, Lorenza. :) I know that the Rainbow Bridge is happy for all.

That is sad, Keisha. "You can tell the morality of a nation by how it treats its animals." - Ghandi We
think this saying is so true.

Pee Ess - we hope you don't get sick anymore. xoxo

Thank u, Prancer Pie. :) I is feelin a little better now.

I am sorry you threw up. That is no fun. I have been throwing up lately too, so I hope we both get better. I am also really sorry you missed out on cake. That is horrible! Dogs need cake now and then! :->

I am very sad and angry about Lennox. Thank you for sharing the story. What is wrong with humans? It is so wrong and just not fair. My paws are crossed for Lennox and we will pray a miracle happens and some good human comes to his rescue.

Dear friend Keisha,
I'm so sorry you were sick, i hope you're better now :)
And i'm so sorry for Lennox too, what a sad story. Our prayers are with him and his family.
Have a nice day.
Woof, woof,

I hope your tummy feels all better! I'm very sad about Lennox too. It's just wrong & I guess those people don't care that the rest of the world is against their decision.

Thank u, Oskar. :) My tummy is more better now.

Thank u, Sam. :) I has love for the doggie and his friends.