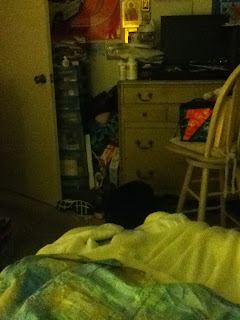 D.R.'s car is fixed now. They took the thing out of the tire and put a different thing there, to plug the space. Now it is all better. They put it back on the car, and she is going to work like normal. D.R. and her Mom and Dad are very happy. :) I am too, because sometimes she takes me to the park. Maybe she do that this weekend? I hope so. :)

U know what? I had an oopsie this morning. I did a mistake on the carpet. Mom and Dad weren't mad, though. They cleaned it up. Then I walked around the house for a bit, and later, Mom and Dad put on the teevee. Everything was okay.

The U-S-A won some more shiny Olympic medals! Other countries won some stuff too. I liked the gymnastics. People were running and jumping and all sorts of things. It was exciting. :) The women from the U-S-A won the gold medal in soccer. Hooray! :)

I saw a truck before. I didn't bark, though, because it didn't stop. It just drove down the block. So, I let it go. :) Then the bug spray guy came to spray the house. I let him do stuff, because he visits us every few weeks. He makes all the bugs go away. That is good. :)

I saw a duck! He was waddling around on the lawn across from our house. He lifted his wings and his b-u-t-t. He wiggled a lot. Then he walked some more. I bet he and Mrs. Duck are building a nest there. :)

I watched teevee with Mom before. She likes this show where police officers ride around and do stuff. I was hoping the canine officers would be on it, where there are some cops who work with search dogs, but we didn't see that. It was kind of fun anyway. Cop cars are funny. They have lights that blink and spin. They also have sirens that go drrrrrrrrrrrrr.

Guess what? Today I ate a dental stick! It is like a toothbrush, only it is made out of minty food. I chewed it all up, instead of brushing with it. The stick makes my mouth smell good, like my hoomins do when they brush their teeth. My friend D.R. kisses me sometimes, before she goes to work, and she smells good. :)

I went to check D.R.'s room a couple times today. I am a sekoority guard, and I have to make sure every room is safe. The first time, I sneaked in under D.R.'s compooter chair, and sniffed a paper on the floor. Then I got kinda stuck, and it took me a few seconds to back out. I was okay, though. The second time, I just stood in the doorway. After that, I went back to the living room. It was good to see that my friend was okay. Plus, her room still smelled like butter, because she ate dinner a little while before that. Shucks, I missed it. :)

Did u ever chase your tail? I used to do that. Then I caught it! Yes, I really caught my own tail in my mouth. I bit it. Then I fell down. That skeered me a little, so I let go. I looked at my tail a little bit this morning, but I decided not to catch it again.

My Mom was on the phone tonight. She was talking to her cousin. They both said a lot of stuff. I am not tall enough to use the phone. Maybe I could ask once, so I could call the pet supply place and ask if they have duck and pumpkin biscuits. I love those! D.R. got me some before.

You might get to go to a park? We will need LOTS of information on this, as we kittehz don't leave the house on exciting adventures, like you do! Have a great day, Keisha. xoxo

Thank u, Prancer Pie. :) If I go, I will write down some fun things to tell.

Sorry you had a whoopsie, Keisha. We are glad your Mom and Dad did not get mad.

Those dental sticks sound yummy. And they make your mouth smell nice, too? That is really good! :)

We agree with Prancer Pie ... please let us know what this "park" place is like, okay?

Thank u, meowmeowmans. :) The park is fun! It has trees and grass and flowers. Everything smells good.

OMC!! A real duck? I wish we could see ducks, I think they're fun. We have a stuffed duck with nip in him and he's SO fun!!

We laughed at the thought of you catching your tail Hope you do go to the park at the weekend. Have a fabulous Friday.
Best wishes Molly

Hi Keisha !
In the pound outside my widow there is 50 Duck´s :)
YES they make a lot of quacking !!
Have a nice weekend !

Hi Keisha, oopsies are okay. Sometimes they happen and then it's just a matter of cleaning it up. But it sounds like you're doing okay so that's the most important thing. Hope you have a good weekend.

Keisha, Yeu are a HOOT! Yeu are fun, funny and a great friend!!!