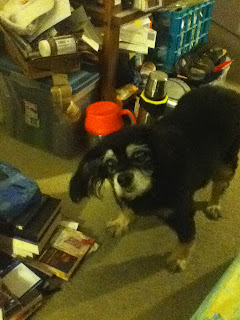 It's Wins Day. It was sunny today, which was good. I heard kittehs outside the house yesterday. They seem to be visiting us again. There was also a kitteh running across the road. He got there okay. :)

A big boy duck was on the lawn between our house and the one next door. I bet he was guarding Mrs. Duck's nest. That means the duckies are going to have bebehs! :) I wonder if one of the kittehs tried to mess with the eggs. I hope not. I know kittehs need to eat, but hopefully the kittehs will find some fruit or something.

I jumped up on the couch today. I sat next to my Dad! Then I checked to see if he had cookies. He didn't, but that part of the couch smells like that. Sometimes he eats cookies there, and little tiny parts drop off. I get to look for them. Also, I push my nose onto his food, if he has a plate. Then Dad kind of nudges me away. I jump on his tummy. It is a very fun game. :)

D.R. did a lot of stuff on her compooter at work today. She has to call phone numbers sometimes, and get information from the phone recordings. Then she writes down what they say. Today, there were a lot of problems with the phones. The recordings kept stopping in the middle, and D.R. had to call the place again, and give them all the information from the beginning. It took a long time. D.R. was kind of frustrated at the end. She came home and pet me, then. She even had leftover chicken for dinner. Because she had dipping sauce with it, her fingers got sauce on them, and I licked her fingers at the end. It was good! :)

On the teevee yesterday, they had a lot of polly tix stuff from the Convention Thing they have in Tampa. D.R. did not go, but she has visited that building before. She said it is a nice building. They always have the car show in it. Yesterday, the polly tix people had a lot of speeches, like this: Blah blah blah, werble werble werble. I got confused and put my head on my paws. Then my Mom put on a different show, which was better. It was just some people standing next to a tree. I like trees. :)

In doctor stuff news, D.R. had to go get another test of her bloods. The doctor wants to see if D.R.'s bloods have numbers in them. If D.R. gets the right numbers, she will get a lot of points and win. :) Then, D.R. has to go to a special doctor, this weekend, who will look at other stuff. It costs a lot of green papers, though, which made D.R. have a big Sad. I rubbed D.R.'s feets before, so I think that will help. :)

We hope all of D.R.'s tests turn out okay.

Have fun watching teevee with your Dad!

Lots of politics these days, right?
I hope D.R. will get all the points needed to win!
Take care
Kisses and hugs
Lorenza

We will purr fur DR's tests to have good numbers! Mebbe your Dad will have cookies soon and drop lots of crumbs. Happy Thursday, Keisha.

I hoping for DR's numbers and that they are goods. XXOO

Hee, hee! We don't think any kitties will be eating fruit! We sure hope your mom's bloods are ok. We are purring for her!