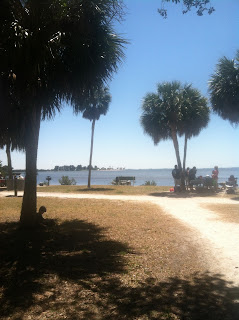 Hi there, my name is Keisha and I'm a dog. Thank u for coming to read mah blog. :)

Guess what? My hoomin friend D.R. had an innervoo today. She is looking for a new job. They asked her lots of questions and had her do some stuff on the capooter. She typed stuff, and the manager person took notes, and then they said they would call later when they made a decision. Also, D.R. has another innervoo tomorrow morning. Wow. It is exciting! :) D.R. said she was a little tired, and after church tonight, she is going to rest and watch teevee. I think I will too. :)

U know what? Mom gave me lunch today. It was chicken and rice. It was good. Then I had some water. :)

The picture above is from a trip D.R. took to Fred Howard Park, in Clearwater. There is a lovely part of the park which is on a narrow peninsula. D.R. took a picture of the road that leads from the top of the park to the other end. It is a really neat place to visit, if you want to go to Flory-dah. :)

D.R. had to have her bloods taken this morning. She had to do a test at a doctor place. The nurse people took her bloods, and then D.R. washed her hands and went home. It hurt to get stuck with the pointy metal stick, but then it was okay. They gave her a little bandage. :)

There was also a cat that walked around at the clinic! A cute tabby cat. It looked about a year or two old. D.R. asked if they wanted her to help the cat, but the clinic people said they were already feeding it, and the cat was going to be okay. :)

Guess what again? D.R. is planning to do a little volunteering sometimes. There are two animal shelters close to us. D.R. wants to help maybe an hour a week at each one. It is good to help critters, because then they can have new homes. :)

Thank u, Tabbies O Trout Towne. :) I think she will get something good soon. :)

Your DR is a really nice and caring person!!

Thank u, Michico, Adan and Lego. :) I happy to have good hoomin friends. And critters! :)

How sweet of DR to volunteer! We hope her tests are all ok. Happy Wednesday!