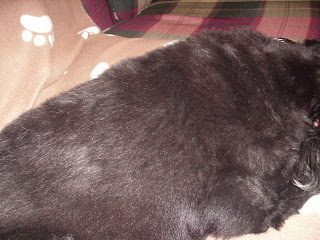 
Hi there! I am Keisha, a spaniel mix, and this is my blog. Thank u for comin here to read it. :)


Today, I had a repeat of a thing that happened before. I was comin back to the couch, after I went to the water dish, and I slipped and hurted my foot. I went Yolp. Mom and Dad were really scaired. They put me on the couch and looked at my foot. I was lucky. It kinda stopped hurtin after that. D.R. went to eat some chikin for dinner, and I sat next to her. She gived me a few bits. Mmmmm! They were good. Mom was still worried, but Dad and D.R. kept watch on me, until I was walkin like normal again. Mom went to sit on the couch and took a nap. I watched Dad eat some ice kreem. Boy, that smells good. :) Don't worry, I's back to normal now. D.R. said it was just a flooke. :) I'm just glad I don't have to go to the emerjensee v-e-t.


D.R. had a good innervoo today! :) She was very glad after it. She said the people at the company were really nice. They have a special lab where they run tests on the stuff from animals. What a coincidence! :) D.R. is good at lab stuff, because she used to work at a lab place in Tampa. The company people said they would call D.R. in one or two weeks, if they make a decision. That gave D.R. a little bit of hope. I would be proud of her if she werks there. Even though I don't like goin to the v-e-t, all critters need to be healthy. From pets to farm critters, we all have to go to the dokter. D.R. will help do the science bits, so the dokters can know if the animals are sick or not. (This is not the stoopy kinda lab that does testing on animals for makeup and stuff. They just help v-e-t-s.) If D.R. gets the job there, she will be helpin the cats and doggies and horses every day! :)


D.R. also got her money check from the Gov-a-mint. That means she paid too much Tacks last year, so they had to give back her stuff. Tacks are confusing things that get in ur money, so u have to fill out a special paper every year. Sometimes they give u money, and sometimes u go to jail. D.R. is okay, though. She got back her moneys. Then she put them in the Bank. She was very happy! :) D.R. even went and had some ice kreem. Too bad I wasn't with her. It was vanilla. :)


It is windy and a little bit rainy tonite. Not big rain, just drizzly. D.R. doesn't have any innervoos tomorrow, so I hope she stays home to watch a moovey with me on the couch. The couch is a good place to sit all day. It is flat and has pillows and a blankey on it.


The dog across the street keeps barkin. I hope he will get used to his new house. He probly needs a friend. I would like to be that. :) Also, a lady duck has built a nest outside our house. We have a space between the flower bushes and the front window of our house. Sometimes birdees put nests there. I hope Mrs. Duck has lots of babees. D.R. says they would be cyoot! :)

We are glad your foot is feeling better

We are furry happy fur D.R. - we hope she gets to do LABrador work again soon!

I am most happy dat your foot is better. Maybe you can gets extra treats tonight. :) Paws is crossed fur D.R. too!

We are glad your foot is okay now! You better be careful! We are also glad your Mom got money instead of going to jail. Our Mama also got money from the tacks, but not much... she spent most of it on bills and has saved a little bit for a rainy day!

Thank u, Trixie, Lily and Sammy-Joe. :) D.R. was very happy to put her money in the Bank. I wish she would get vanilla ice kreem more, too. :)

Hi Keisha, I'm glad that your foots is all better. I had an ear infection but I'm better now too. I hope that D.R. gets the job.

Hi Keisha, thanks you for dropping by my blog. I'm so sorry about your poor foot but I'm glad to know it is a lot better today.