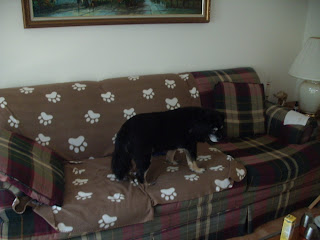 
Today, I am lucky. My Mom and Dad called the v-e-t, and he said I am gonna be okay. I am doin pretty good! My head is a little tilty, after I fell off the bed the day I had the Thing; but now I can walk, and eat, and drink, and I have run around like a good goggie full of en-ar-jee. :) Mom and Dad were so happy!! When D.R. came home from church, they told her what they dokter said, and she pet me a lot. :) It is a releef not to have to be so wurried all the time. I still like to sleep on the big towel next to the bed, though.


I got a special treat for lunch! :) I got to eat chicken and rice. Mom's brother, mah Uncle, said it is good for dogs who have an upset tummy. I had a little tummy rumbles after the Thing, so the food was not just yummy, it made me feel good. Thank u, Uncle. :)


D.R. was playin video games on a new thing she has, called the Kinect. It goes with her X Box game thing. U jump and run and stuff, and the Kinect-whatsis has a camera that can see u, so u move around on screen as if u were in the game. U can get exercise just like in the gym. D.R. says it is a lot of fun! If they have games called Jump on the Bed, Wrestle the Toy, or Chase the Tennis Ball, I would like to play, too.


I did some barkin today! :) Mom says this means I am back to normal. The doggie across the street yips a lot, so I went to the window and told him, Arf-arf-arf. I don't know if he heard me. Maybe he did, 'cause it's kinda quiet now. I hope he is takin a nap, or maybe watchin some teevee. :)


Speakin of the teevee, I got to watch the nooz with my Dad today! :) It was funny. They had some numbers on the screen, and pikshers of airplanes, and cars and stuff. Dad had some ice kreem while he was watchin it. I got to have a little!! :) It was vanilla. That is o-kay for dogs. (Chocolate is not, so plz be careful.)


I had a little bit of peetza, when D.R. was eatin lunch. She gived me a tiny piece of crust. It was good! It had some sauce on it. :) The best thing was, my tummy felt good after it.

Oh Keisha, it makes me so happy to know you are feeling better!

My Mommeh got the X Box Kinect just a few weeks ago! She plays The Biggest Loser, but she said she feels very out of shape because it makes her breathe hard.

Glad you are feeling better! Sometimes we get rice when our tummies are upset too. We wish we could have it EVERY day! Our Mama says she wants to get a kinnect!

Thank u, Trixie, Lily and Sammy-Joe. :) The Kinnect is fun. If they make games for dogs and cats, critters could play while their hoomans go outside! :)

I'm so glad you're feeling better. It's nice to get extra treats too.

Hi, Keisha!
Glad to know you are doing well!
Sure you had a nice and yummy sunday!
Take care
Kisses and hugs
Lorenza

Thank u, Sam. :) I like tasty food, and Mom and Dad were happy that it made my tummy all okay. :)

Thank u, Lorenza. :) The bestest part was being able to be with my hooman friends again. They cuddled me a lot, and it is good to know u are loved. :)

That's wonderful news, Keisha & we hope it stays that way!

We are very glad you are feelin' better Keisha - and ice-cream and pizza will always make you feel better! Be good, Tail Wuggles, Rubie.

Hi Keisha, I am so glad that you're better. I hope that you never have that thing again. I think it makes our moms and dads get older suddenly.

Thank u, Amber-Mae. :) I was back to my old fun stuff, followin my hoomans around, and tryin to get some of their food. :) I am feelin better than the last couple days.

Thank u, Rubie. :) Vanilla ice kreem tastes sweet and yummy. It is good after ur regular food. :)

Thank u, Sam. :) My hoomans were really scaired before, but now everyone is much more happy. They feel good that I'm healthee. It is good to not be scaired anymore. :)