Medicine is not yummy 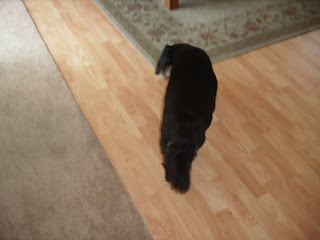 O hai! My name is Keisha. Thank u for readin this blog today. I happy u are here! :)


I had a little bit of a sick tummy on Toosdey, and I had to go to the v-e-t in the mornin. Mom and Dad took me. I didn't like it! The dokter gived me some Shotz, which were Bad, and then they gived me some more stuff I would have to take later at home. Mom and Dad took me home, and then they had to make me hold still, while they put a plastic dripper full of medicine in my mouf. Yuck!! :( It was Bad! But they let me go as soon as I had all of it. Pleh, pleh, pleh. It was not delicious. I felt better after that, though. My tummy stopped doin the cracklies, and I didn't have to go outside so much. Mom and Dad said they were glad I am gonna be better. :)


Ever since the Thing the other day, I like to sleep on the floor, instead of on the big bed where I have to jump up. Mom leaves a towel on the floor. The towel is big and fluffy, and very soft. It feels good on my tummy. Mom and Dad say it's good for me not to jump on things so soon after I was sick. It's like I'm on a special camping trip. :)


It rained a lot on Toosdey nite! Wow, it was loud. The thunders went boom, and lots of rain came down. When I went for walkies later on, Wensdee mornin, the ground was still wet, and there were leaves everywhere. There was a lot to sniff. I was happy to get back to the house and be warm again, though. :)


D.R. had noodles with sauce and a little bit of chicken for dinner on Toosdey. She gived me a little. Mmmm, that was good! :) It was nice to have some really tasty people-food again. I eated it and she pet me on the head. :) Yay!


D.R. is still lookin for werk. She calls a lot of people, and they call back sometimes. She is hopin to get some more innervoos soon. When she doesn't have stuff to do, she goes outside for a walk, listens to music, reads stuff, or watches the teevee. D.R. also likes to draw pikshers, or take pikshers with her camera. I will be happy when she has a new place to werk, 'cause then she can bring me what's left of her sammich from lunch. :)

Yes I agree, medicine tastes yucky but it does help to make us feel better. Hope you're feeling better now.

Thank u, Amber-Mae. :) I am glad that my tummy is gettin better. I have to take the medicine for four more days. That's a lot, but when it's over, I'll be really glad. :)

Hi Keisha, I'm really sorry to learn that you had to go to the v-e-t. Pills and liquids from the v-e-t are not my favorite either. But when I have to take some, my mom and dad put the stuff in Greenie's Pill Pockets. It helps alot. Check it out, it may help http://www.greenies.com/en_US/products/dogpillpockets.aspx

I'm sorry you have to take yucky medicines, Keisha!

Thank u, Daisy. :) I got some of the yucky medicine stuck on my furs. Mom said she is gonna clean that with a towel. At least I don't have to take a b-a-f-f! :) Mom promised me I don't have to go in the tub, so I feels good about that.

Hi Keisha! We hate medicines too - but we know they do make you better, so we think it is good you took it well (Kirzon always spits his out and is sick longer then). We hope you are all better soon and are sending you lots and lots of purrs and prayers.

We think that it is cool that D.R. shares her stuff with you - and we hope she finds work she likes soon - that is hard to do - sometimes you find one, but then you don't like it or you find one you like but don't get it. We are purring for her to find a good one soon, so you can have her sandwiches again!

We don't like medicines too!
We are glad that you are better now!

Thank u, Terrorzinhos. :) The good thing is, my stomach is doing better, so I can eat more now. I like food! :)

Thank u, Amy and Cats. :) D.R. used to bring home her potato chips from work, sometimes. That was really good! One time, I got almost half a bag. Oh boy, those were yummy! :)

Oh noes, Keisha, we're so very sorry to hear you were sicky. You're right - Medicine is NOT yummy. We are so very glad to hear you are feeling better now, though!

Thank u, OKcats. :) I wish they made medicine with peanut butter in it. Then it would taste good! :)

Medicine is yucky! But we are glad it is making your tummy all better. Tell your mom good luck with her interviews!

Thank u, Trixie, Lily and Sammy-Joe. :) Today, I had to take more of the yucky stuff. The good thing about it is that it makes me able to eat other stuff, like regular food. I like to eat lunch and dinner! :)