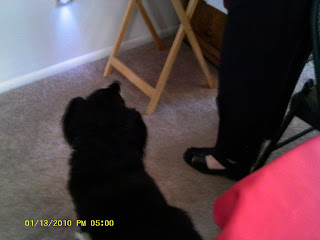 (O hai! This is me, running to get some food at the Furry Kitmas party in December.)

Helloo! :) Thank u for coming to read mah blog today. My name is Keisha. It's good to see you. :)


It's kinda hot where I live. I go outside for walkies, and then I come back in and rest. Sometimes I play a game. It's really fun. It's called Jump and Land on Dad. I run into his room and leap on the bed. Sometimes I land on Dad. He pets me, and it's fun. :) I like that.


D.R. had half of a very tiny little dish pizza tonite, with two tiny slices in it. It was one of those things for one hooman only. She eated half of it, and gave me some little bits from the crust. It was yummy! :) I liked that a lot. Mmmmmmm.


Yesterday, D.R. had some cereal for dinner. I was sleepin on the couch. I was so tired, I didn't even check to see if she'd give me some cereal. A lot of nites, I watch teevee with Mom, and it gets late, so I just go to sleep right there on the couch. I can stretch my paws, which makes me feel good and relaxed. I also put my head on the armrest, like it's a pillow. That helps me catch all the Zzzzzs. :)


There were lots of birdees outside before. They went caw, caw, caw. :) A lot of them are doin stuff, now that it is springtime. I was walkin with Mom before, and it was fun to watch the birdees goin flap flap all around.


The flowers are growin in front of our house. They are very pretty! :) D.R. said they looked very fluffy before. I like to sniff them when I go out.


D.R. was havin a cookie before. She said I couldn't have it, because it had chocklat. She did pet me on the head, though, and that made me feel okay. :) Later, D.R. had some pistachio nuts, and she gived some to me!! :) Yay! They tasted good. I crunched them pretty good. Crunch, crunch. :) Mmmmm.

It's hot where I lives too. Guess it's better than being buried in the snow. I has such short little legs that me and snows don't mix.

Hi Keisha, I'm glad that all is well at your house. Love, Sam

Thank u, Amber. :) I likes to take walkies more now that it's warm. U can see bubberflies and stuff! :)

You sure get lots of good snacks from D.R.! And your game with your dad sounds FUN. :)

Have a great weekend!

Thank u, meowmeowmans. :) Play time is fun. We also chase my stuffed toys, sometimes. I leave the stuffers under the table, then. :) I hope u has a nice weekend! :) {{{meowmeowmans}}}

It's nice to know that everything it's ok with you and your family.
Have a nice week!

Thank u, Terrorzinhos. :) I am doing well, even though it is raining today. I'm having fun, watching TV with my Dad. I hope u get lots of snacks this week! :)